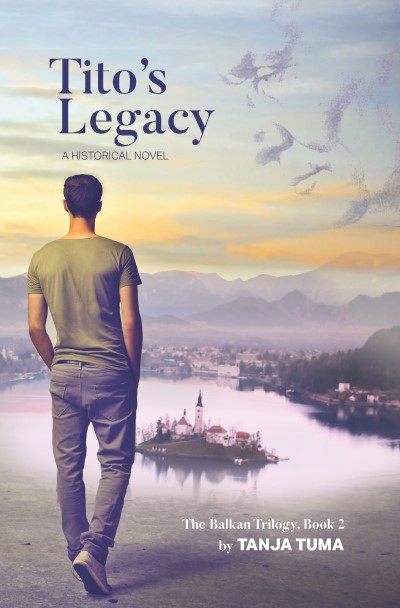 Tito’s Legacy is the second part of the Balkan Trilogy, Tanja’s epic homage to the passionate people of former Yugoslavia. Winds of Dalmatia, the first book, was published in 2013. Like Tanja herself, the scarred and tragic protagonists in Winds of Dalmatia survive the Yugoslav wars during the 1990s and continue their destiny in Tito’s Legacy. Again, we meet Paula Perić, daughter of Maria, an entrepreneur and hotel owner with a shady past, and Jovan, a Serbian commander during the Bosnian War. After surviving cancer and her parents’ death, Paula pursues her studies in Ljubljana, where she meets Matej Nemec. They soon become best friends.

The son of a notorious tycoon, young Matej can’t help but have ridiculously high moral standards. Through his writing, he brings the history of Slovenia and Istria to life — from the prehistoric pile dwellers on the Ljubljana Marshes to Baroque polymath Baron Valvasor and the first known vampire, Jure Grando, to Comrade Tito and his famous guests, Richard Burton and Elizabeth Taylor, on Brijuni. In his quest for truth, Matej stumbles over some horrible evidence. He loses his money and standing in society, only to find his humanity as a drifter in the sordid dregs of a big city.

"Much like W.B. Yeats, Tanja Tuma knows that the story of a culture is best told by its preserved legends. This collection beautifully reveals the soul of Istria and Slovenia."

"Tanja Tuma's love for the people of ex-Yugoslavia shines through in Winds of Dalmatia and Tito’s Legacy. The undercurrent running through these books is an honest, passionate desire for peace by someone who’s lived through war. Filled with intimate knowledge of local customs and places, her novels are a must-read for anyone interested in learning more about the southern Slavic region."